You could end up miles from home with a puncture that is impossible to repair. My local bike shop, Reg Taylor on Iffley Road, had never seen this (they were, however, able to sort it out).

Removing a tight road tyre (a 23mm Gatorskin in this case) often involves squeezing the bead into the central well of the rim. On this occasion, the bead on one side refused to move, even when the bead on the other side was off the rim.

So the tyre had to be cut off (and the inner tube too, since the valve was also stuck).

The valve eventually succumbed to a sharp tap from a hammer, but the rest of the tyre resisted a variety persuasive methods – gripping with pliers and pulling hard merely tore off a bit more of the tyre.

Pushing a screw driver blade down between the bead and the braking surface and levering had no effect and risked damaging the rim. It was as if the bead were welded to the rim. I’m not sure how the bike shop succeeded in removing it, but I think I know how to avoid this happening in future.

First a couple of background points. 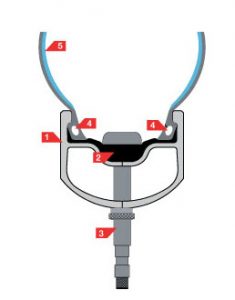 2) The tyre had come off 20 months earlier for a wheel change, but it was an old tyre (almost 4 years old in fact).

Given the inconvenience of being stranded away from home on a Sunday afternoon (summer holiday in the Italian lakes?), a preventive measure might be (every 6 months or so) to let all the air out of the tyre and check that the bead on both sides is still free to move into the central well.

The age of the tyre might have played its part – but it’s not easy to know when a tyre (especially a slick) should be replaced. I notice, however, that more recent Gatorskin tyres have 2 wear indicator holes about 1-2mm deep. So perhaps I’m not the only one to have suffered this problem with an older tyre.

Sunday ride to Waterperry and Wheatley