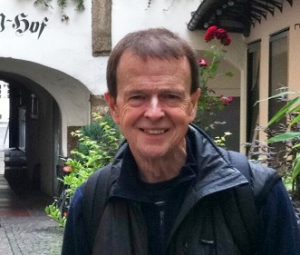 Compared with many Cycling UK members, my riding experience is relatively recent. In the mid 90s, I had bought a decent hybrid bike, with Shimano Biopace oval chainrings, fashionable at the time and still around 30 years later (2012). The story begins on holiday in France, when I spotted a notice on the campsite board, advertising a mountain bike ride. In my innocence I turned up with the hybrid. This was the first time I had seen suspension forks and strange little pedals (spds). It was a ride to remember! The following year, again in the Alps, I bought a Decathlon Rockrider and upgraded to those funny little pedals. I still have the scars to remind me of the first few rides, but I never looked back.

For the next decade, I was a mountain biker, never a very skilful one, but (with well padded knees and elbows) always willing to give it a go. During that period, I became well acquainted with the trails in the Peak District around Castleton and Edale. Did the infamous Jacob’s ladder 3 times (walking most of the way). Rode the Brecon Beacons, the Afan and Coed-y-Brenin purpose built trails, Exmoor and – my home ground until I moved to Oxford – the Chilterns. I suppose my epic ride (October 2010) was the West Highland Way, a 100 mile walking route from Glasgow to Fort William, not intended for bikes and indeed impossible in places.

I began road riding in the spring of 2006 and, despite riding for only an hour or two at weekends by way of preparation, signed up for Mountain Madness in August – riding 26 Pyrenean cols from Bordeaux to Perpignan, 16,000 metres of climbing (that’s more than 50,000 ft for imperial lovers). I learnt my lesson and now have a better understanding of the need for adequate preparation. I also now realise that road bikes of the mid-2000s were not geared with the non-athletic rider in mind and it was to be another 5 years before SRAM introduced its 11-32 road cassette (Shimano followed some years later).

I joined CTC in 2005 (mainly for the cycle camping holidays!) and have been riding with Oxford City since I moved to Kennington in 2008. My poor navigation skills are a standing joke among my riding colleagues, but various Garmin Edge gps devices have kept me reliably on track since 2009.

Sunday ride to Watlington and Nettlebed

Sunday ride to Waterperry and Chearsley

Sunday ride to Watlington and Nuffield