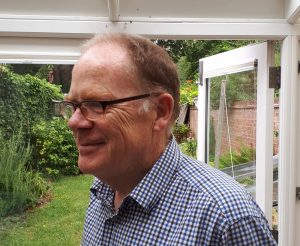 Beyond everyday use of my bike I’m essentially a touring cyclist. About eight years ago I read Edward Enfield’s book Downhill all the way (1994) and thought, ‘That’s me! I’d enjoy doing that!’ After a lot of preparation I made a similar journey to his, and since then I haven’t looked back. The bike in the front hall was then (and still is) a Dawes Kalahari (c.1998). I thought it would be suitable for touring with a tent. With some modifications, it has served me well. At first this was just a matter of putting a Marathon Plus tyre on the back wheel and a Champion Flyer on the seat post. Then a couple of years ago the entire drivetrain was replaced, with much lower than standard gears, so that I could attempt more hilly terrain than formerly, and today not much more than the frame, stem and handlebars are original: most recently, I’ve got rid of the clapped-out suspension forks, substituting (much lighter) ordinary (steel) ones.

Being a bit bookish, I like to explore the literature of any activity I get interested in. The doyenne of bicycle tour writing has to be the incomparable Dervla Murphy (Full tilt, 1965, but even better, her autobiography, Wheels within wheels, 1979) though the cycling book that I retain the strongest affection for is Richard Ballantine’s Richard’s bicycle book (1972). I can still remember the excitement of first reading it in the mid-1970s.

Sunday ride to Waterperry and Otmoor

";
Warning: count(): Parameter must be an array or an object that implements Countable in /home/customer/www/oxfordcycling.uk/public_html/wp-content/plugins/events-calendar-pro/src/Tribe/Customizer/Section.php on line 213