Sunday ride to Waterperry and Cuxham 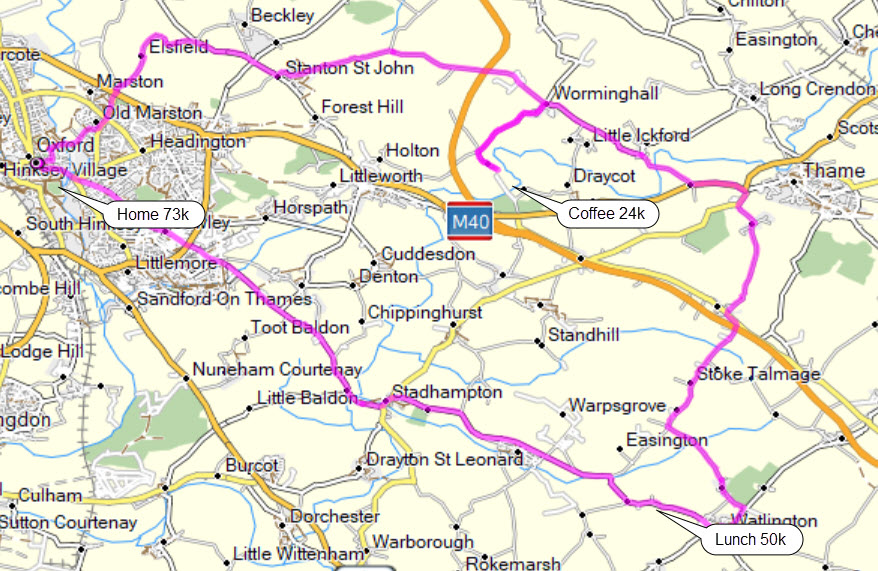 A slightly undulating but mostly flat route. A mostly tarmac track after Thame which was OK when we used it previously, then skirting the edge of the Chilterns with a short, flat ride back after lunch.

A cold but quite dry day, with a stiff north breeze. A roundabout route to coffee, some of us seeing a normal looking pheasant but with a white head near Beckley. Jackie met us at coffee having been delayed by a “shoes issue”. Note, if you use waterproof socks, you don’t notice when your shoes are wet – until the next time you put them on, so after using waterproof socks, check your shoes for wetness!.

After coffee there was a puncture in Shabbington, where a committee of 5 evolved :

Suprisingly, there was no general offerer(s) of “helpful advice”.

After eventually getting the back wheel on, it was found the tyre had quite a cut in it, so the wheel fitting process was repeated and a £5 was used as a tyre boot. The off road section was quite an acceptable surface. With good views across the the Chilterns, and also to the west we continued to Pyrton where another puncture occured (another less financial tyre boot required), so 4 continued to lunch, with the remainder joining us a bit later. A good lunch at the Half Moon in Cuxham was had, and all ordering/payments went smoothly this time.

After lunch was an uneventful run back into Oxford.

Sunday ride to Woodstock and Finstock